a bright casual mccalls 6751 for summer

I saw this fabric and knew I needed it! The colors, the print, the softness, the drape! The questions was, what to make? Mr. Sew Rachel thought I should make a maxi-skirt, and while I do love my maxi-skirts, I really wanted a top. But, with a large print like this it had to be a pattern without a lot of pieces and seams, and large enough to really show the print off without overwhelming my small frame. I decided to try a new McCalls pattern, M6751 view D. 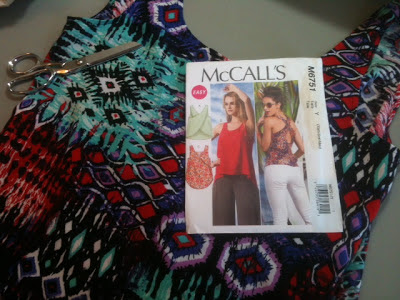 It's not that l'm crazy for the butt flap trend this season, but it needed a little something to avoid being just a boxy top. After looking at the finished garment measurements I decided to cut a size smaller. 6+ extra inches in the bust? That's too loose for me. Even so, the shoulder straps lay a little too wide, which I'm finding is the case with most patterns on my frame.
The back is designed to be made from one pattern piece, cutting two so they mirror each other. I thought, "how silly to waste such beautiful fabric by having a double layer over the butt flap. It isn't even seen!" So I cut the bottom piece to just under where they overlap, and then had enough scrap for a cool infinity scarf! Wrong move. Once I had it on, the way the "V" in the back draped revealed the bottom edge of the under-layer, and a big ugly opening! I had to top stitch the two pieces together along the top hemline about 6 inches from the side seam to prevent the gaping. It's mostly invisible, but now the back "V" doesn't drape nearly so lovely. What did I learn? Next time follow the instructions because they are probably that way for a reason. 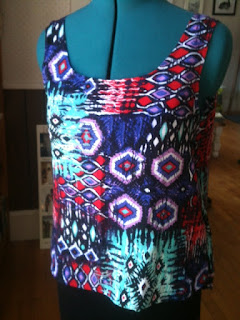 Speaking of instructions, I discovered a fabulous little nugget of information tucked in the M6751 instructions! The options for finishing the neckline, armholes, and hem were bias tape or a narrow hem. I wasn't so pleased with bias tape when I used it for the top I made for my sister, so I thought I try my hand at a narrow hem and discovered THIS: 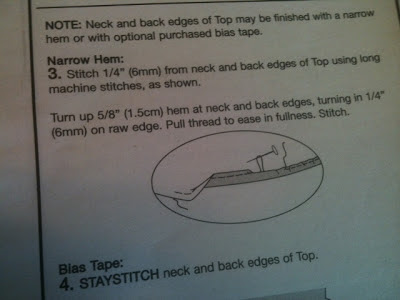 Why had I not seen this before?!?! What a great way to ease in a curved hemline, and even with the straight hems that extra line of stitching made for a great guild-line! Remember how in the last post I stated how much I hate hemming? Well I still think it's tedious and fussy, but at least I now have a tool that makes it a little easier and lead to better results!
Posted by sew rachel! at 3:14 PM