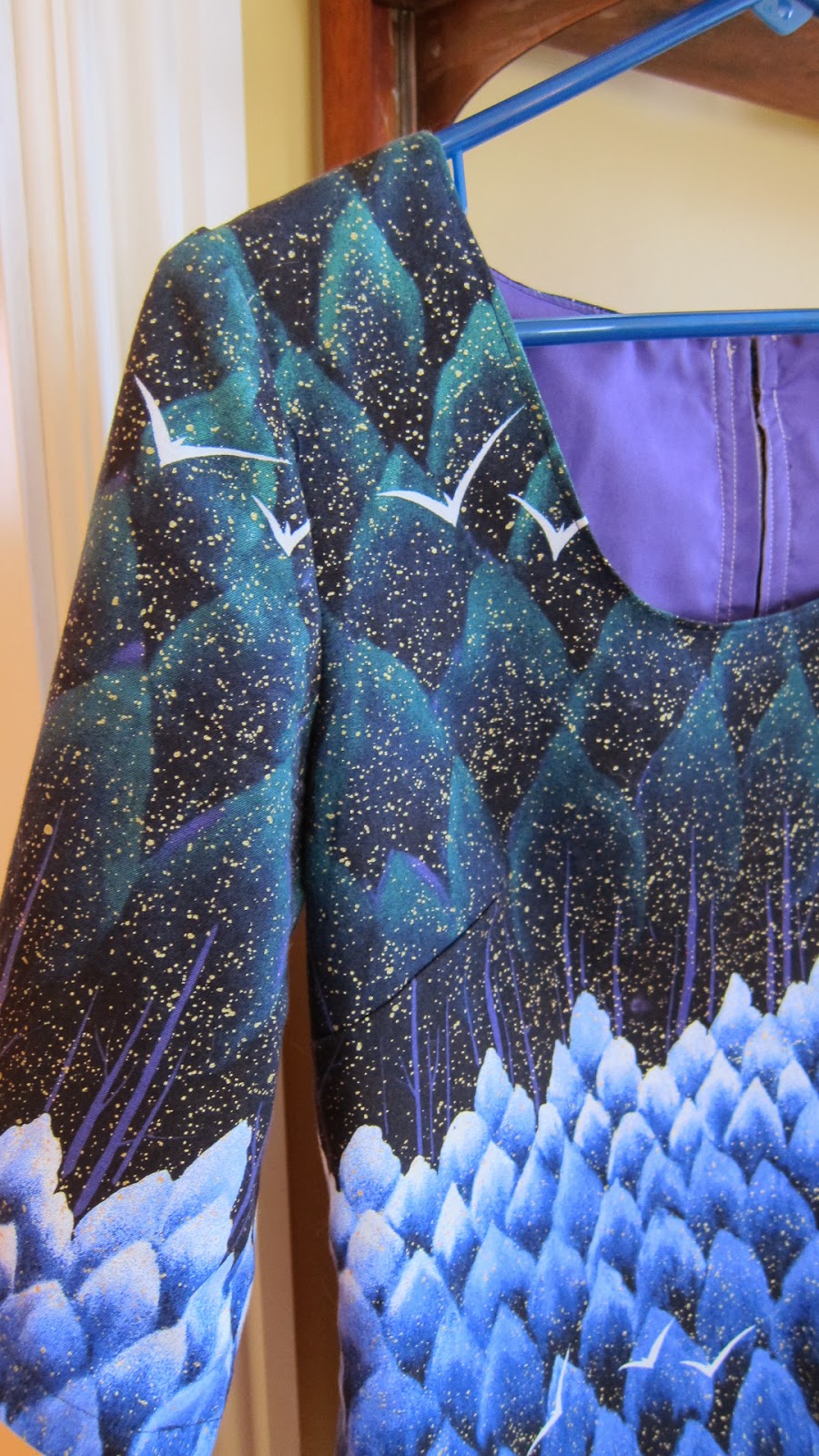 My MIL every year hosts a big annual Christmas party. It's a perfect excuse to get dressed up on a small island in Maine, and each year there are about 70 guests eating and enjoying each other's company in her home. Last year due to some kitchen construction, her Christmas party was postponed until January... and everyone loved it so much more after the holidays that now it's the annual Not-A-Christmas Party! Of course after this past year of sewing and blogging... I had to make a fabulous party dress. 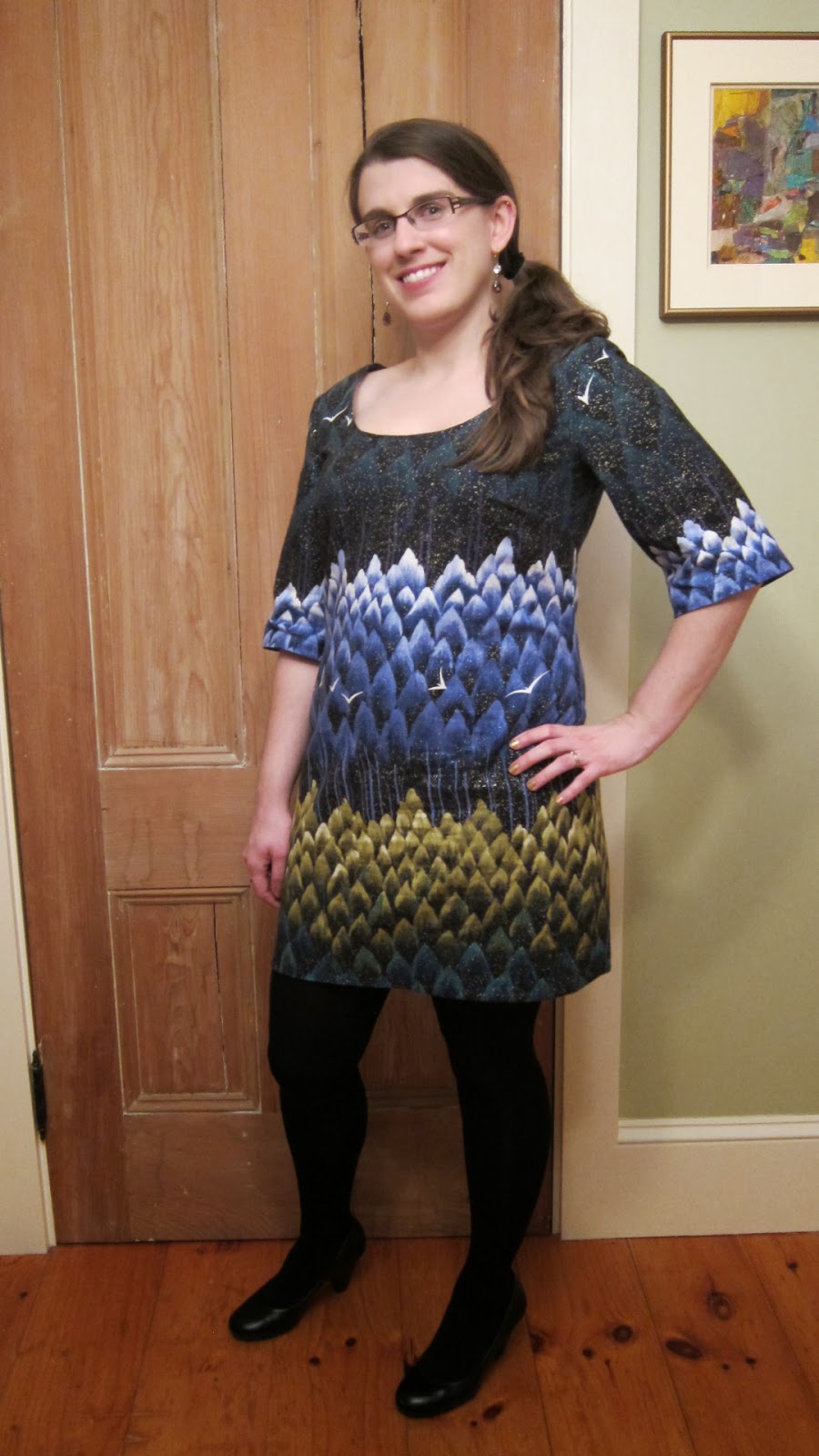 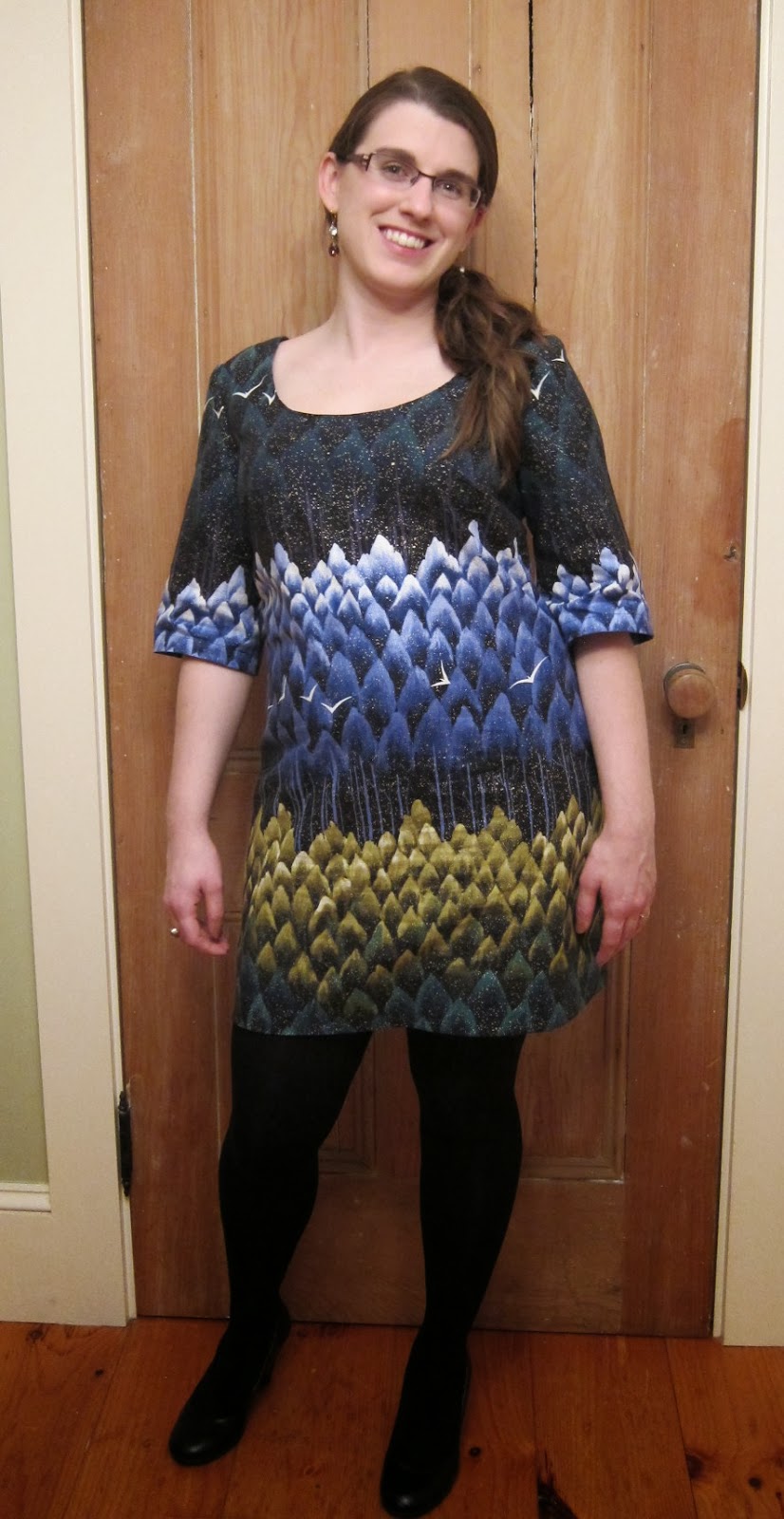 The pictures were taken at the end of the party after the quests had all left, so it's probably a smidge wrinkled. I used some very cool, large scale "Yokohama Forest" quilting cotton  by Alexander Henry. The fabric was nice and thick, and both washed and pressed beautifully. Isn't is sometimes nice to sew with plain, old, cotton? Because of the large scale of the print, I spent a lot of time decided what would be the best placement of said print on my body. That also meant very careful cutting to get the pattern to line up perfectly across the seams. I ended up having to fussy-cut the sleeves from single layer from the scraps left after cutting the bodice, and was just able to lay them out so they would also match up. Totally worth it!

I used an out-of-print Butterick pattern (the number escapes me currently so I will find out when I'm back home, but something along the lines of this McCalls pattern), for a simple shift dress with back darts, french bust darts, and scoop neckline. Only three pattern pieces! Perfect for highlighting my fabric!

For adjustments I shortened the pieces just below the bust line, between the waist and hips, and then a few inches more when I did the hem. Even though I measure at a pattern size 14, I looked at the finished garment measurements and decided to cut a 10 for the shoulders, bust and waist, then grade out to a 14 in the hips (which seemed a little odd as I don't really consider myself pear shaped). By cutting the 10, the shoulders fit perfectly with no further alterations, a rare occurrence! I had to fuss with the shape of the side seams in the hips a few times to get that to lay right. It's still not quite perfect, but very close. I ended up re-drafting the whole sleeve to a straighter line for a looser fit. 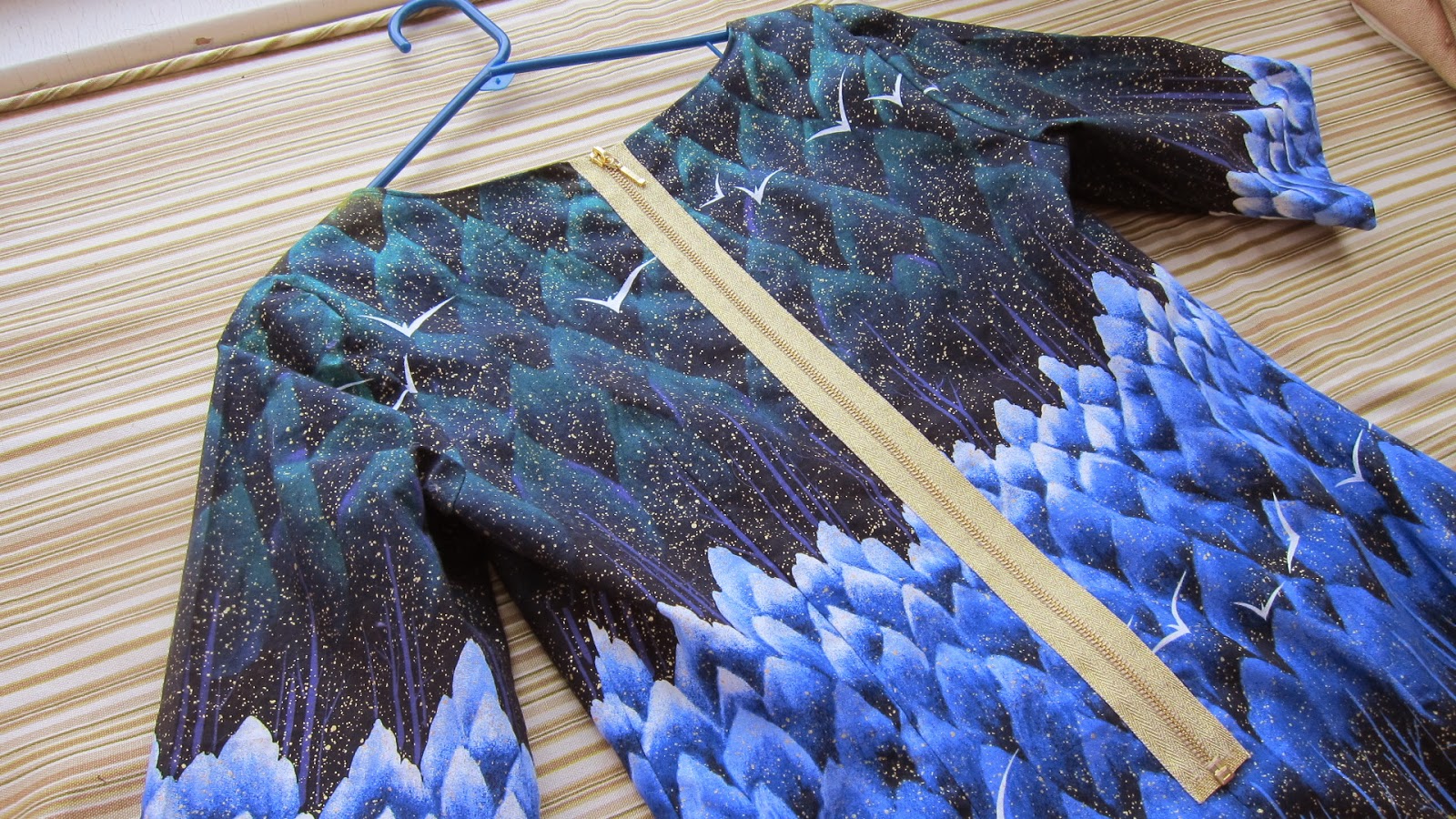 On the back, I decided to try a trend and put in a gold exposed zipper! (Can you believe the retail price on that thing was almost $20! Good thing I had a nice coupon.... it was worth it.) The zipper was originally about 8" longer and ended below my bum... not cute. Traditionally I would shorten it from the bottom, but I wanted to preserve that neat finish that already came with the zipper. So I shortened from the top, tucking the end in between the lining fabric and creating a zipper-stop with superglue! (Probably not the approved technique in Vogue's New Book for Better Sewing...)


I lined the bodice with some vibrant purple fabric from my stash that matched the purple in the cotton print. It's probably a synthetic, but has a matte sheen and weight similar to a silk blouse I own and love. Made a lovely lining! I finished the hem by hand. The sleeves were unlined and finished on the serger. Speaking of sleeves, they took forever to set in! I've been spoiled by knits that can be stretched into place. It's probably good for me to be forced to re-learn to set sleeves in woven fabric, as I'll need to know that later this year when I make my coat! 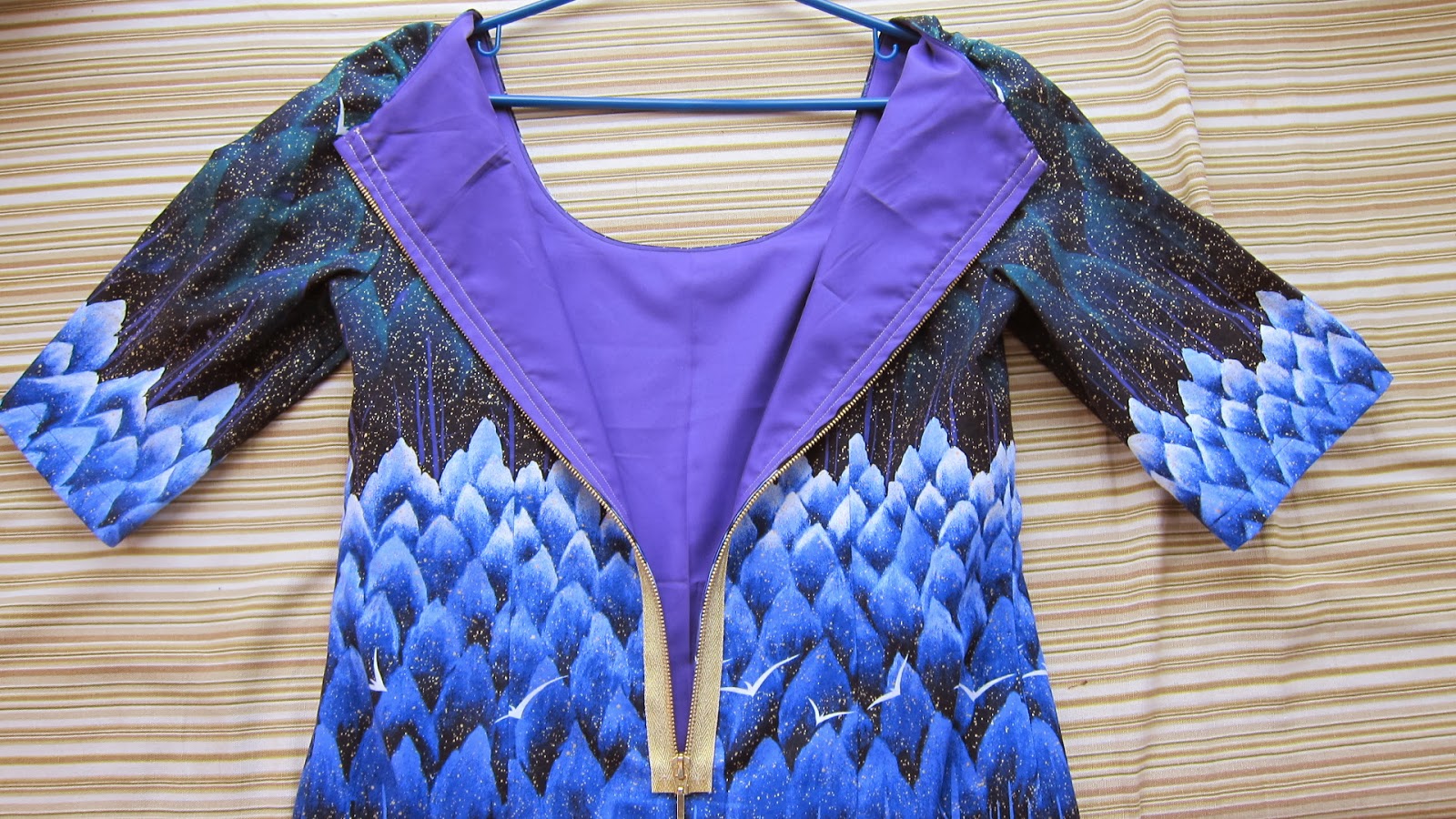 The verdict? The dress was very comfortable all evening! Even after lots of food and dessert! I also wore my Ginger high-waist panties for the first time, and they were also very comfortable! So far all my 2014 garments have been great successes and additions to my wardrobe. As an artist, this is a perfect cocktail dress for any functions or events I would be attending, and it will get a lot of use!