the quest for real pants

While I've had some good success with the Elle Pants... I felt I really needed to make some real pants, with a fly and pockets. So for the last month I've been working on and off on Simplicity 1969 Amazing Fit Pants, and finally have something to show you. 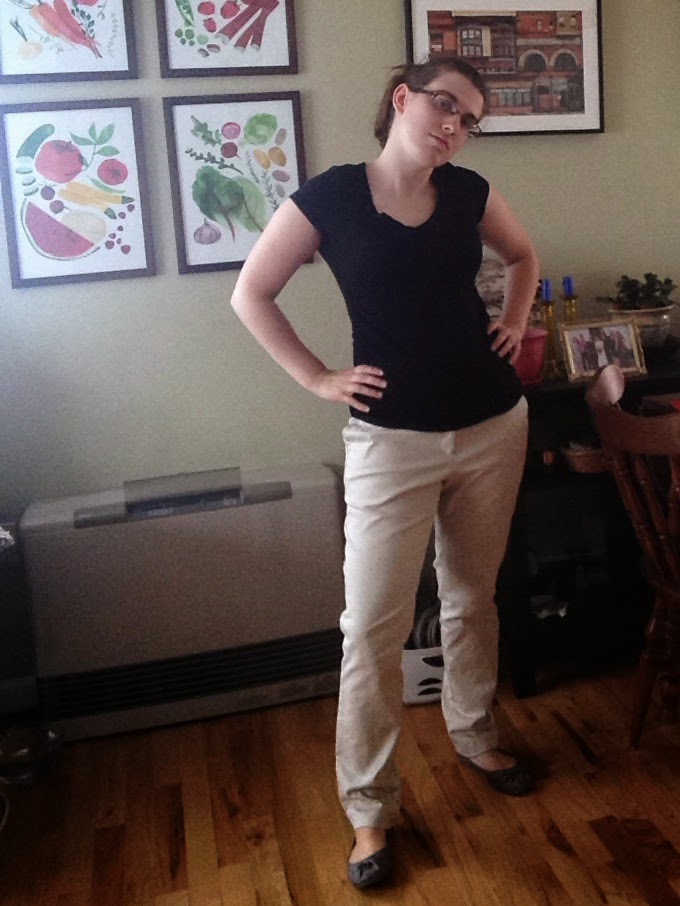 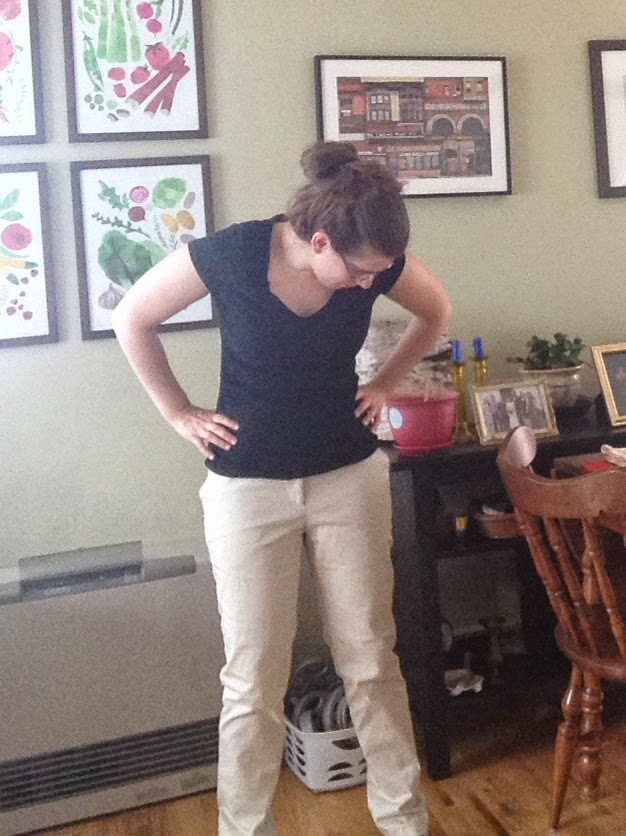 I used a mid-heavyweight khaki with a fair amount of stretch that came from my mom's stash. The fit actually looks much better in these pictures then how I feel they look (and feel) in real life. I worked really hard on these and in some areas they look really nice, like the pocket construction and the "carriers" (aka belt-loops... didn't know that when I started!). I tapered the legs in even more (even though it's a "slim pant" pattern) to try and get a more modern look. The pattern is designed to be worn 1 1/2" below the waist, which I learned was too high especially on my short frame. At this point I'd already inserted the fly, and there was no way I was ripping that out again after the number of attempts I made to get it in! I was able to lower the front rise by a little over and inch when I attached the waistband. Unfortunately that wasn't enough, and I had to rip out the crotch seams to be able to take in another 3/4" from the front rise there... probably not the correct way to go about that. 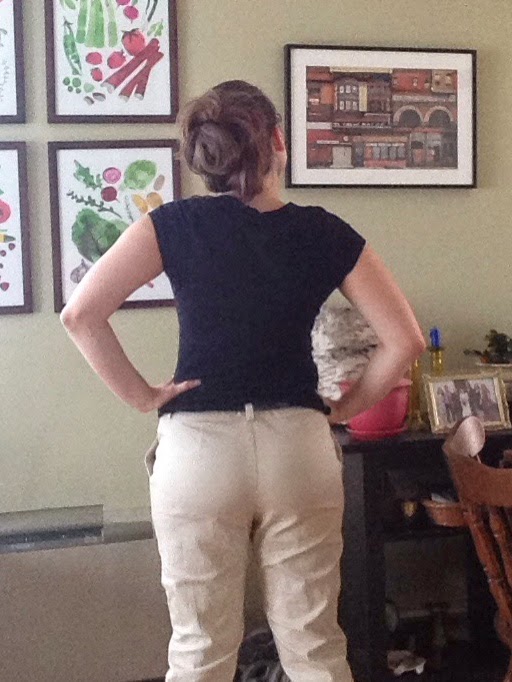 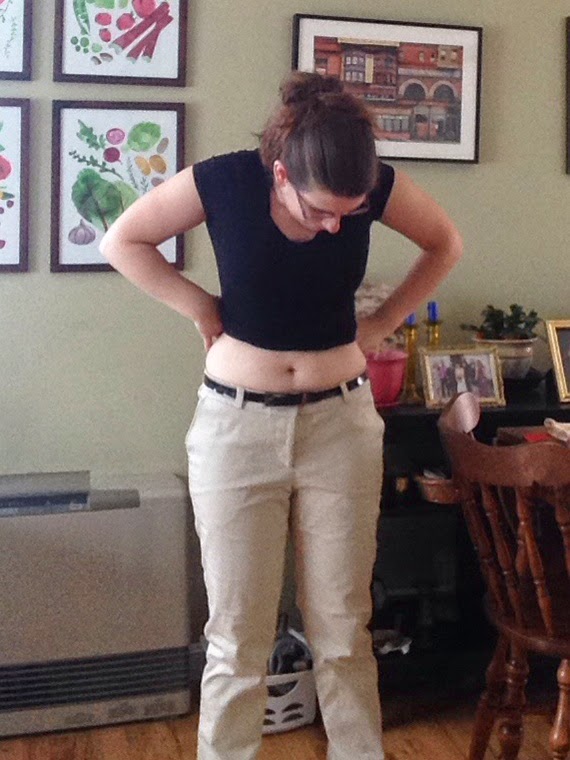 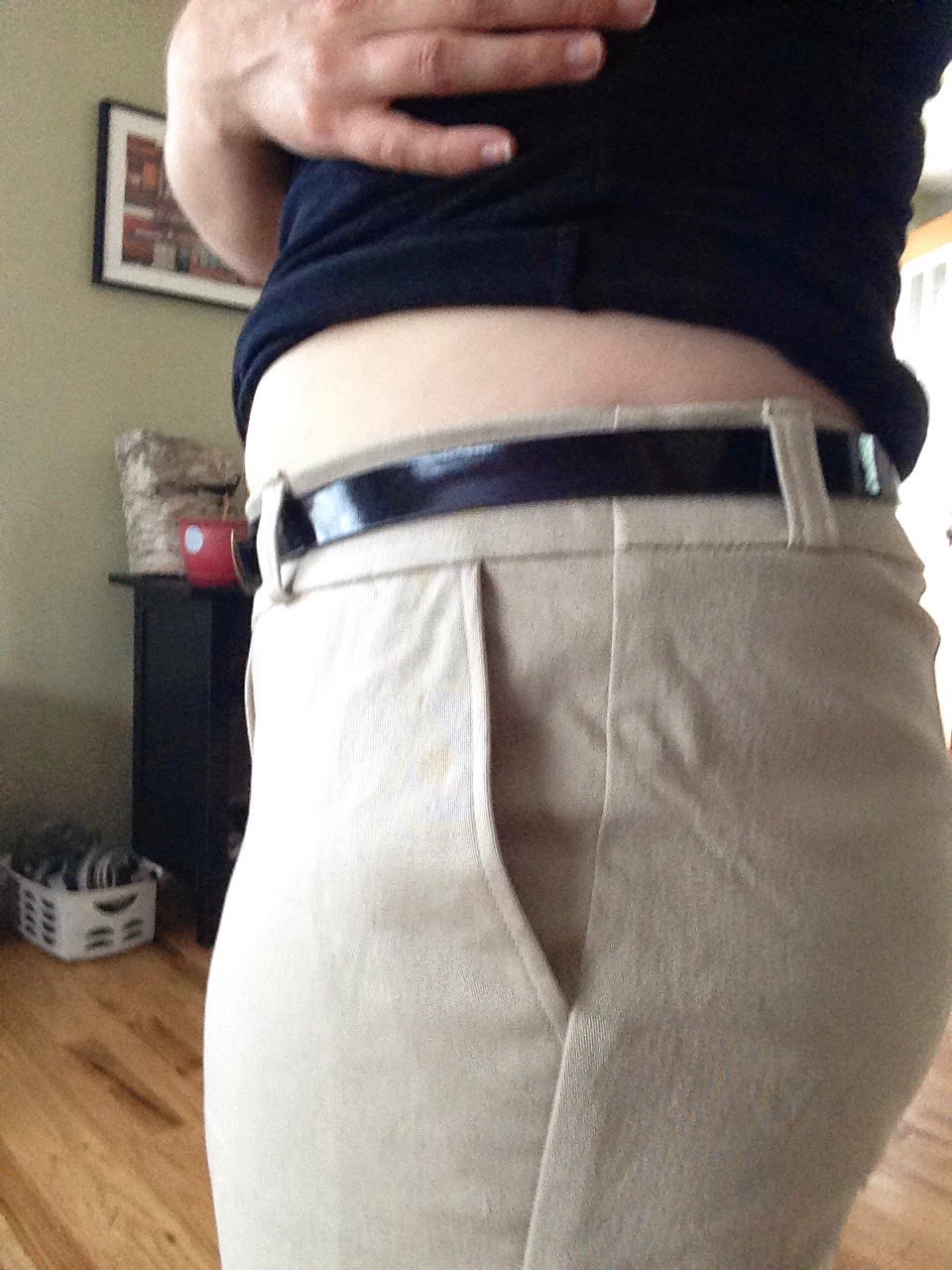 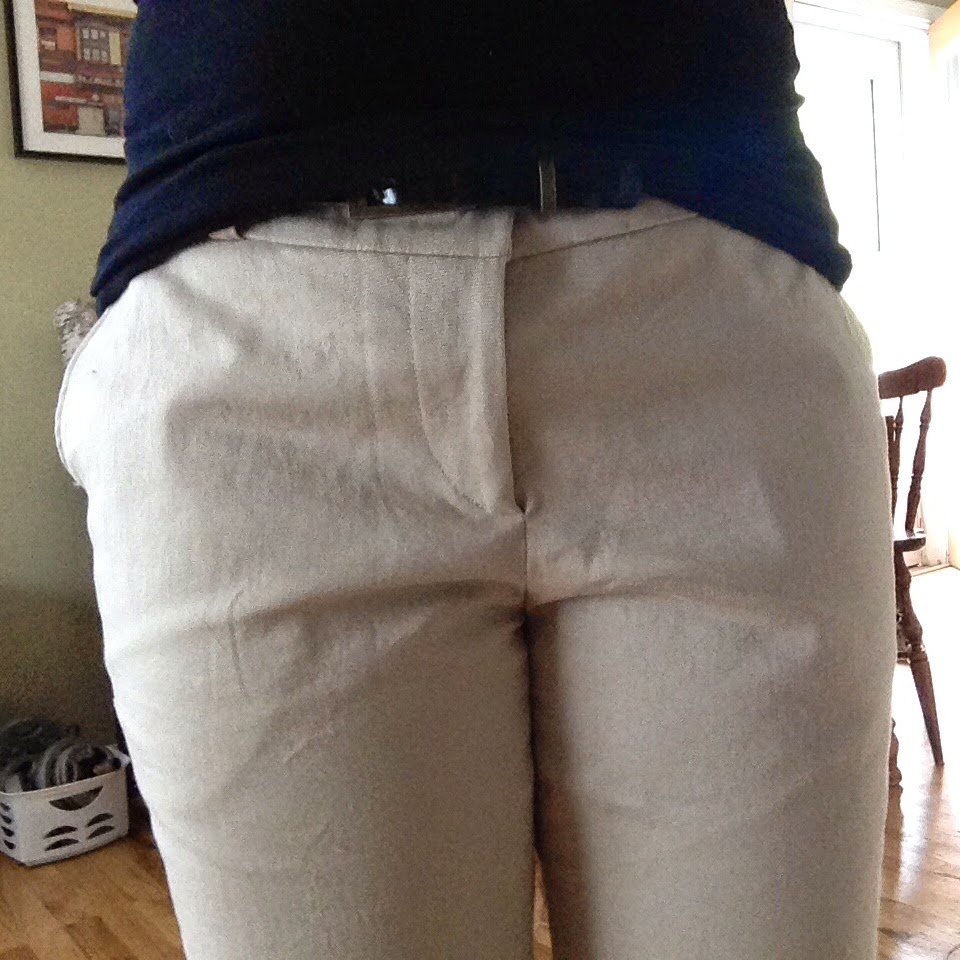 The rise still feels too high in the front, and the waistband ended up a little too big so they like creep... no, rapidly settle to a more natural, lower pants position on my body. All the previous pictures are with a belt to hold them up, and there still feels like a lot of extra fabric in the front. And if you take the belt off: 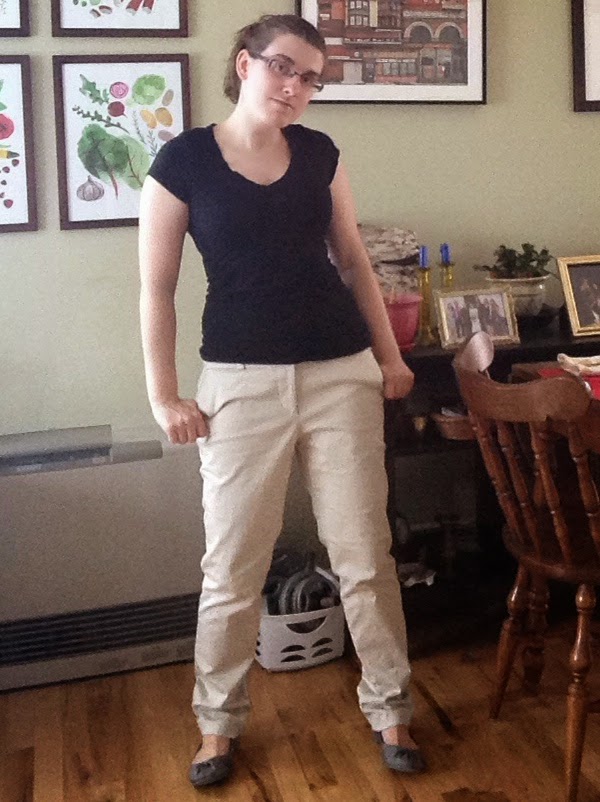 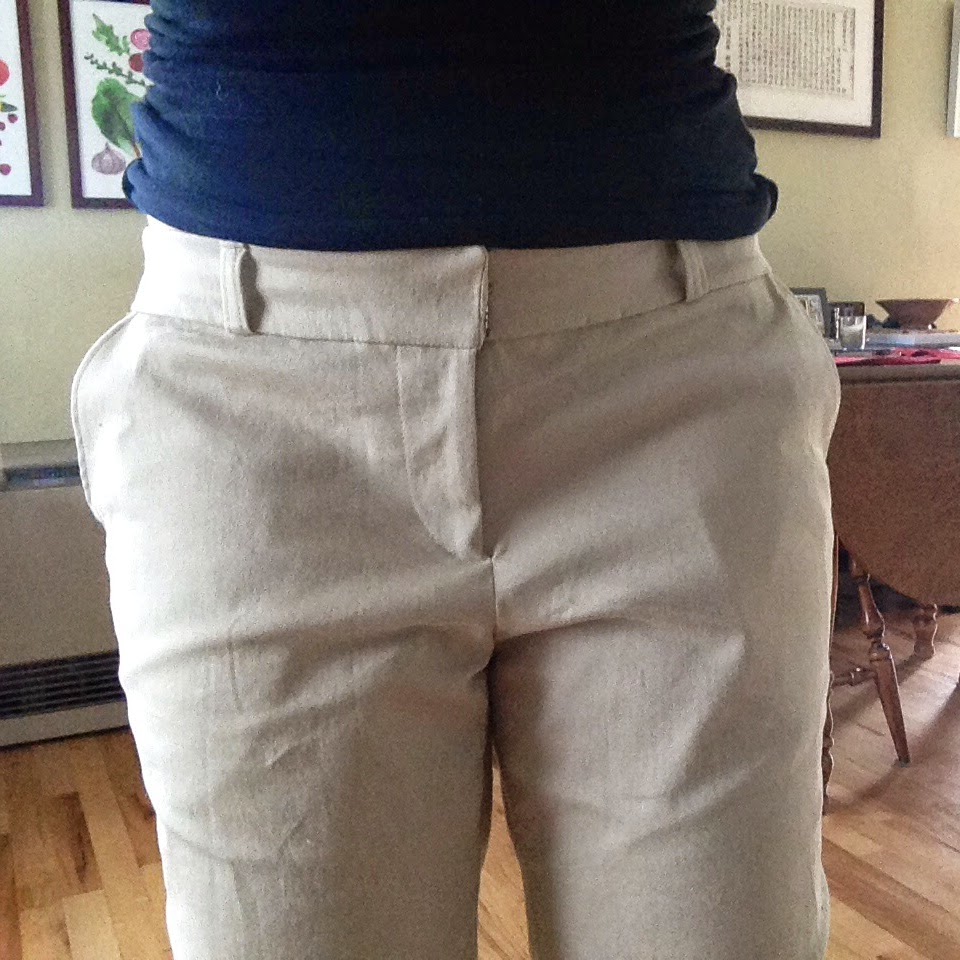 I don't know if you can tell... but the crotch seam of the pants is, like, 3 inches from it's anatomical counterpart. And it's uncomfortable as they move all around (and down!) with every little movement I make. And apparently I can't sit down at all:

And that picture is with the belt! After reading a pants post by notes from a mad housewife, I tried scooping out (and down) the back center curve and that seems to help a little with the extra fabric in the front. Should I have also scooped the front curve as well? Or added more crotch depth before I even started? Part of the problem with pants is than I'm not even sure how to diagnose the fit problems, so I then can address them more properly. Any thoughts or experience with this issue? Since the fabric has stretch, would it be beneficial to stitch in some firm ribbon to keep the waistband from stretching? (Even though I did use some interfacing.)

So overall... with a belt these could be acceptable pants when business casual is required... as long as I don't sit down. If I try this pattern again I'll lower the rise even more before inserting the fly, or maybe look at the SBCC Manhattan Trousers, which is already designed for a shorter rise. Or just make more Elle Pants: 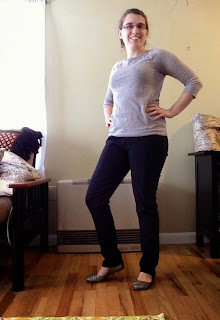